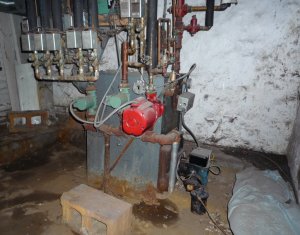 If you have a boiler, chances are, it’s wasting a lot of energy!

At today’s fuel oil costs, (~$3.50/gallon in March 2011), it’s more important than ever to conserve. This is definitely one of those cases where it pays to do your homework.

What if I told you there’s a good chance that your boiler is half as efficient as they told you? You wouldn’t be happy, would you?

Let me tell you a personal story. When I moved in my house, it had a relatively modern boiler, rated at 82% efficiency. It heated the houe and the water. I figured that was pretty good – no need to upgrade, right?

As I started monitoring the boiler and my oil consumption I realized something must be wrong. Come spring, after I turned off the heat, the system was still running pretty regularly. I’m sure you’ve all experienced this. You’re sitting in a quiet house, and every half-hour, you hear your boiler turn on for a few minutes. What’s happening here?

You may have heard the term “standby losses” in reference to water heaters. That’s the amount of energy required for a heater to sit at idle. In the case of a water heater, that’s the heat lost through the jacket that has to be replenished to keep the water at the desired temperature. You rarely hear about standby losses when it comes to boilers, but you should! Boiler standby losses are much greater than water heating losses. In fact, I’ve found that the actual energy lost to just keeping a boiler hot is greater than the energy required to heat water in a typical household! This is no joke.

For water heating, a typical family should require no more than about 1/3 to 1/2 gallon of heating oil per day, assuming typical uses and system efficiencies. Or, if you’re using propane, that translates to 1/2 to 2/3 gallon of LP gas. Or, if you’re on natural gas, this is about 1/2 CCF or therm of gas. But when I look at energy consumption of people using boilers for water heating, I usually see one or more gallons of oil used per day. That means the fuel usage is double what it should be for water heating. Where’s the extra energy going?

With water heaters, we’ve all been trained to install extra insulation blankets to reduce the standby losses. But somehow, we’ve forgotten about the boilers. Boilers run much hotter than water heaters – typically 180°F compared with 120-130°F in a water heater. Standby losses are directly related to the temperature, so, all other things being equal, a 180°F system will lose energy at about twice the rate of a 120°F system. But, all things aren’t equal. Boilers typically have very little insulation. If you’re lucky, they have half the insulation of a water heater, and one third is common. So if you factor those things together, a boiler loses four to six times as much through standby losses as a typical dedicated water heater!

Let’s look at some operational costs…

Cost of operating an oil boiler

This adds up fast! Costs for a propane boiler are roughly the same but can vary considerably depending upon when you buy the fuel. In our area, propane can cost as little as $1.25/gallon during the summer then rocket up to $3.00/gallon during the winter. So you’ll have to do your own calculations. But assume that you’re wasting about half of your fuel costs during the non-heating months.

Why are boilers so bad

As noted above, boilers run at a much higher temperature and they have less insulation. In a word, they suck (energy).

Keep in mind that this has nothing to do with the combustion efficiency of the units and the AFUE ratings do not seem to take this into account at all for non-winter usage even though AFUE stands for Annual Fuel Utilization Efficiency! When you talk to your heating contractor, they’ll deny it too, claiming that their units are rated 84% efficient. Well, sorry, that’s B.S.

Do a little test. At a time when your house heat is turned off and nobody is using hot water, listen for your boiler running. When it comes on, time how long it stays on. Also note the time. Then wait until it turns on again. Do this for an afternoon to get several cycles. For example, let’s say your notes look like this:

We want to compute the percentage of the time the system is operating. So first, compute the time period, in this case, we made our last measurement at 2:55 and the first at 12:15. That’s 2:40, or 160 minutes.

Next, we compute the amount of time the system actually ran, up to, but not including, the 9 minutes at 2:55. We exclude the last number because that’s actually part of the next time period. Trust me, that’s the way the calculation is done. So we have:

Next, compute the fraction of the time the system runs:

This tells us that the system runs 1/8 of the day just to keep hot. That’s pretty horrendous! Now compute how many hours this is:

In this terrible example, the boiler runs 3 hours a day just to stay hot. That’s totally standby losses. You would then have to find the GPH (gallons per hour) consumption of your boiler. This is usually printed on a label on the boiler. It might only give you a “BTU input” value. If it does, divide that number by 140,000 to get the GPH rating.

This simple test which only takes an afternoon reveals a wealth of information about your boiler’s use. It’s a real number that you can use to figure out just how bad your boiler is.

But wait, it gets worse!

How the heck can it get worse than this?

Have you ever noticed that your boiler room is usually the hottest room in the house, winter and summer? That’s your heating dollars at work! During the winter, most HVAC pros will tell you that you don’t have to worry about standby losses – that heat is inside your house, so any losses are going to heat your house. But does it really?

Where’s your boiler located? Probably some dark, cold corner of your basement, made hot by standby losses. Is that heat really going where you want it, like up to that far corner bedroom on the second floor? No, its hot in the basement because the heat is heating the basement, not your house.

Some small percentage of that heat is warming the floor of the room above, but not much. Basements are notorious for heat loss, but you often don’t notice because the boiler is keeping it warm. Plus, most boiler rooms must be open to the outside air because they need combustion air. So frankly, the argument that standby losses don’t matter in winter is a bunch of hooey.

During the summer? Guess what that heat is doing? It’s working against your air conditioner! So not only is it wasting energy staying hot, you have to then pay again to cool the house down for that “free heat” that the HVAC people tell you you’re getting. Either way, you’re paying a lot and getting little in return.

I’ve painted a pretty bleak picture, so what can you do? Is it possible to save those hundreds of dollars a year that your boiler is wasting?

To learn that, read my next article: “How to prevent your boiler from stealing your money”…

Until then, get out the stopwatch, and start measuring just how much your boiler is ripping you off.

Some other reading if you’re bored

Raypack modulating boilers – a good article for gear-heads who want to learn more from a boiler manufacturer. Note particularly graph 3 that completely supports all the assertions I’ve made in this article 🙂

2 thoughts on “Is your boiler stealing your money?”