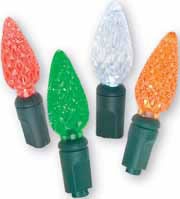 As you shop this holiday season, you’re probably seeing a lot more LED Christmas lights. Their colors are more vibrant and they’re vastly more energy efficient than conventional incandescent Christmas lights. But do they pay off?

Let me ask you something – when you buy a string of lights for decorating, are you thinking “what is the cost-benefit ratio of these lights?” Or, are you thinking “will these look good in my house?” Me personally? I’m thinking that I hope they last for more than one season and I don’t spend next Christmas searching all day for that one burned out bulb! Few things put me in a foul mood faster during the holiday season than having to waste time. I’ve purchased a variety of LED light sets. Some are fantastic, while others are too faint. But all have been reliable and none have burned out. This alone make’s it worth the $10-$20 per string.

What about energy savings?

As an example, this string from EFI’s store, uses only 3.4 watts per 24-foot string of 70 bulbs. If you use mini-lights, you’re consuming about 15 watts per string. But if you’re using the larger bulbs, the savings really add up. Larger bulbs might use 1 watt or more per bulb!

This energy consumption adds up. Since many holiday lights are burning round the clock for several weeks, the total power consumed can be significant. For example, you might use three of these long strings on your tree and another five on and around the house. Let’s call it eight total.

Those eight strings, each requiring 3.4 watts, consumes 13.7 kWh if used for three weeks. That costs about $2.00 (for all eight strings). Not at all bad.

Mini-lights will cost about 5x that amount to run, or about $10.00. Still, not a big deal. You’re not going to pay off the price difference between the LEDs and the mini-incandescents any time soon. But if you use LED’s to replace larger bulbs, you’re going to save somewhere between $30-$50 per year (again on all eight strings). Now that starts adding up and you’ll pay off the LEDs in just a few years.

Note that these comparisons assume that the incandescents actually last. I find that I’m lucky to get a couple years out of a conventional string. Usually, I end up salvaging bulbs from one non-functional string to bring another back to life. Just the time wasted doing this costs more than the cost of the LED string. This is much less of a problem with larger incandescent bulbs because those typically are easier to track down. But then, in those cases, the financial equation is much more compelling.

No matter what, you’ll probably find that you purchase at least one string of LEDs in the next couple years. As prices drop and they become available at more stores, you’ll also find more disappointing strings of LED lights, so be sure to see what they look like before you invest. But definitely try them out. A good set of LED Christmas lights will literally last forever.