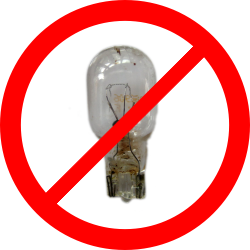 I’m personally not a big fan of landscape lighting, because 99% of the time you don’t need it at all. As they say in the business: “the most efficient light is the light that you don’t use.” But for many, landscape lighting is a necessity. In this post, I’ll cover several ways you can reduce the energy used for your outdoor lighting. How does a 98% saving sound? Unbelievable? Read on!

You know from reading my posts, I’m a numbers guy. I only want to expend my energy on things that make a meaningful difference. So what about landscape lighting?

I have some lights in my walkway. There are lights embedded in it so people can see their way up the walk. But the bulbs are about as inefficient as you can get. Each fixture, of which there are 8, has two, 7 Watt incandescent bulbs – the same used in most landscape lighting. At this low wattage, incandescent bulbs are incredibly inefficient. On top of that, the cheapo transformers that usually power them also throw away a lot of energy. This adds up to big energy saving opportunities!

Start with these 8 fixtures, each using 14 Watts. That’s 112W. Not a huge amount. Now add in the transformer efficiency. When I’m all done, the system consumes about 150 Watts whenever it runs. Many people have lights on a photocell so that they’re lit up whenever it’s dark out. Let’s figure on an average of 12 hours per day, 365 days per year.

That is: 150 Watts * 12 hours/day * 365 days/year = 65.7 kilo-Watt-hours (kWh) per year. At my electric rate of 16 cents per kWh, that amounts to $105/year. Keep in mind, this is just eight small fixtures. People often use many times this amount, so their consumption is much higher. But it gives us a nice round number of just over $100 in electric costs per year. How can we improve that?

The equation above only have two variables in it over which you have any control, so this is pretty easy to solve. The first step is to reduce the hours that you run the lights!

I have a timer that turns my lights on around sunset and off at 11pm. I could be more aggressive, but my wife likes the path lights on just in case, so the lights go on! This saves me from burning the lights from 11pm to 6am, or 7-hours a day, reducing that 12 hours to an average of 5 hours. This changes the equation above by the same amount, reducing the electric costs to $44, a savings of $61 per year. Not bad for just turning off the lights when they’re not being used! That easily pays for the timer which you can get for under $20 on Amazon.com

1a) Reduce the hours even more

I lied. It drives me crazy to have the lights on every evening when I know we’re not going out and no guests are coming. So why just shine light into the sky?

Most landscape lights are plugged into an outdoor outlet, so people have no control over them other than walking outside and unplugging them – inconvenient at best. I set up a remote switch so I can just flick off the lights and my wife can turn them back on as needed. This simple switch allows us to cut the hours much more. This is called “demand driven consumption” and it’s about as efficient as you can get. In my case, the timer still turns the lights on at sunset, since we often go out about that time, but then when I get home, I just hit the switch and turn them off. For us, that cuts the consumption in half again.

Remember, this is just for eight fixtures. But with almost no effort, I’ve reduced my electric use by about 80%.

The other approach is to reduce the Watts consumed by the lights and transformer. I started by purchasing a high quality Kichler torroidal transformer. In fact, Kichler now has very nice LED landscape light fixtures. They’re quite expensive, but beautiful and efficient.

I am also now experimenting with retrofit LED bulbs. A single 1W LED gives me about the same light output as the two, 7W bulbs originally, so that single change lets me reduce the consumption of all the lights from 112W to 8W! Let’s run some numbers.

Suppose I didn’t install a timer like in step 1 and continued to run the lights 12 hours per day. But instead of the lights and transformer using 150W, I use the high efficiency LEDs and transformer, reducing my total to about 15W. That’s a 90% saving by replacing the bulbs – a huge difference. And again, that’s without the timer or switching the lights off. But at what cost?

The super-bright LEDs I purchased were $10 each! That’s a lot of dough for a single landscape bulb. So I’d need $80 of bulbs to retrofit my 8 paver lights. If my original electric bill was $105 and I’ve reduced it by 90% using these bulbs, then these would only cost me $10.50, saving me $94.50/year. All things being equal, the bulbs would pay for themselves in under one year.

But the equation is never quite so simple…

2a) Use a timer and switch the bulbs?

Remember back in step 1a, we reduced the electric bills to $22 by using a timer and turning the lights off when they weren’t going to be used. That’s the logical starting point for everybody before jumping into $10 light bulbs. This means our bulb savings, while still 90%, is a much smaller dollar amount. If we save 90% of a $22 bill, reducing it to $2.20, we’re saving $19.80 per year by using LED bulbs.

The LED bulbs still pay for themselves, but now it take four years of electricity to pay off the difference. For most people, this equation still makes sense because they’ll enjoy their landscape lights for more than four years. In addition, LED bulbs last essentially forever.

We all know that normal landscape bulbs, once burned out, tend not to be replaced. Rather than worrying about that, the LED bulbs are more likely to last many, many years, so you won’t have to worry about replacing bulbs as often.

Summary of savings for landscape lights

System payback: about one year.