This video is a promo for my upcoming video series, Building Science vs. B.S.

Unfortunately, B.S. like this gets spread by supposed experts, further perpetuating these damaging myths.

The problem is, people are really bad at reaching proper scientific conclusions. Our brains are wired to look for patterns, and research has shown that we create patterns where none really exist. For example….

It’s called “perceptual vigilance” and it leads to all sorts of incorrect conclusions. It causes people to think something in their environment has changed, while in fact, it is only their brain that changed!

There’s another favorite term among scientists: “correlation is not causation.” This is a related cousin to perceptual vigilance. What they’re saying is that just because two events appear to be correlated, it doesn’t mean that one caused another.

Insulation  does not cause roofs to rot!

A contractor remodels your bathroom in the winter. They install some lights and a fancy new bath fan. Since you’re “green”, you suggest that he* adds insulation to your attic. 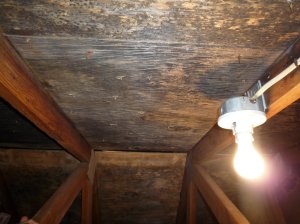 Argh! Mold in the attic!

After a few months, you go up to your attic to store some boxes and find mold everywhere! WTF! you think as you beat a hasty retreat. You call your contractor and yell at them about all your mold taking over your attic as you think about having to replace your roof and everything you’ve been storing in the attic.

“Oh yea, I’ve seen that before”, says the contractor, “It’s because you wanted me to add that insulation. Didn’t I tell you? Too much insulation causes mold.”

The summer goes by and most of the attic is mold free. That autumn you call back the contractor and tell him that he must have been right. Insulation causes mold.

In addition, you’re much more likely to get attic mold during the winter because the attic is cold when it’s properly insulated. During the spring and summer, the attic may be too warm for the moisture to condense. The high temperatures can literally bake the moisture out of the roof. Same for the sunny south side of the roof (for those of us in the Northern hemisphere).

In the above scenario, chances are, when winter rolls around, you’ll get mold again because the attic will get cold enough for serious condensation issues. But, if you are leaking enough heat to the attic, you might not even have problems then.

Insulation did not cause the mold — sloppy contracting work leading to high moisture levels combined with a cooler attic caused the mold. There are plenty of attics that have been super insulated that have absolutely no mold problems.

How do you fix it properly?

Bathroom areas are notorious for problems like this because showers contain air saturated with moisture. Air leaks from the bathroom allow moisture into the walls or up into the attic. So it is imperative that you takes extreme measures to air seal bathrooms and properly flush out the moisture.

Taking these steps – venting the humidity properly and air sealing the bathroom from the attic, will eliminate that source of moisture, greatly reducing moisture and the related mold problems.

Keep in mind that you might have several bathrooms and other openings that allow moisture into the attic, so I strongly urge you to do a full evaluation of the attic, looking for any place that is not air-sealed. Recessed lights, attic hatches and pull-down ladders are particularly notorious for these issues. See The Energy Guardian for really good products for sealing and insulating hatches and ladders.

*Contractors are mostly male, so I’m using male terminology rather than the awkward, but  politically correct: he/her etc. The mere fact that I have to justify the use of a pronoun annoys me to no end….