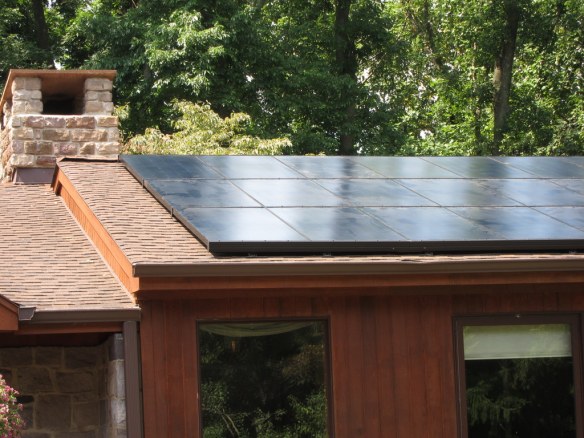 Now that I’ve had my panels installed for over a full month, do they really work as advertised?

The short answer is Yes! I’ve been very happy with the amount of electricity produced by the panels, in spite of the fact that this August has been quite rainy. Especially when compared to June and July which were sunny and hot! But that’s life in Eastern Pennsylvania. We have real weather here!

In English, we’ve got a pretty good installation, pointed south on a low pitched roof rancher style home. Some trees around the perimeter of the property shade the system in morning and afternoon, but overall, the production of the system is within 20% of optimal. Good but not perfect. In other words, pretty typical.

The system size: 9.66 kilowatts. That’s above average for residential system. We wanted to fill the full roof of that section of the house and get as much capacity as possible because our home’s electric load is high. The national average size is around 6 kW but is steadily increasing due to rapidly decreasing costs.

SunPower provides some nice tools that show your system’s performance, so whether you’re at home or away, you can see how the system is doing. This is our graph for the month of August:

It’s a little hard to tell, but the production varied from a low of about 18 kilowatt-hours (kWh) up to a maximum of  just under 52 kWh, averaging 38.73 kWh per day. This would supply all the electricity for many homes in the U.S where the nationwide average consumption is 31.50 kWh per day (source: U.S. EIA). In my home, I’m not so lucky because we have some “luxuries” such as a pool (heated by a separate solar hot water system), hot tub and air conditioning. So our home is not “net zero.” In spite of that, the way I see it is that our solar system is doing the equivalent of removing one house from the grid.

Most people are interested in how much an expensive solar system will reduce their electric bills. In my case, my bill in July was $331, and in August it was $119. In 2011, our August billing period costs $288. While this is a very imprecise comparison due to many variables, it does give you a rough idea of the change – we saved approximately $200 for the month.

It’s very important to note that this is for a single summer month where the system’s output is high. In the winter, the system will produce considerably less energy due to the reduced solar input (shorter days and lower sun angles), so this information is preliminary. The one year accounting will be most useful.

According to the estimates from Heat Shed, the estimated total solar production for the system for the first year is 11,986 kWh with a first year savings of $2,266. For August, they projected about 1,100 kWh which is almost exactly what our system produced, giving me confidence in their estimates. They also projected that my August electric bill would be $123, so again, they are pretty much dead-on.

This is where things get considerably more speculative, but it is one of the first questions people ask about solar – they want to know if it really pays to get solar.

First, as I mentioned above, the production from my system is roughly equivalent to taking one house of the grid. This in itself is worth something from an environmental perspective. If every installed solar system can do that, it’s a good thing for all of us. It’s an investment in our future. Compared to other expenses people make that don’t return anything to their communities, investing in solar is truly “doing the right thing.” Unfortunately, most of us are not in the position to make such a large investment purely for philanthropic reasons. So I’m going to “show you the money!”

We financed our system using a 20-year “pre-paid lease” option. Basically, this is a lease where you pay the full amount up-front and have no interest payments. I hate interest payments, especially since the value of money in the bank and in traditional investments these days is horrible and unpredictable.

The upside of this financing mechanism is that it allowed me to get the system for about half the cost of an outright purchase. At the rate of technological advances and the rapidly diminishing prices, this seems like a prudent decision. Second, since SunPower owns the system, they are responsible for ensuring that it works. If anything breaks, they come and fix it. If I purchased the system, I’d be on the hook for any repairs.

The downside of this type of financing is that I never truly own the system. After 20-years, SunPower can come and take the system away or we have to pay the residual value of the system. Even so, that is less than what it would be to buy the system now, so there’s little true downside to financing the system this way.

Based upon the projected savings, which is based on the decreased electric bills, we will save an amount equal to the purchase price of the system after seven years. Even if you factor in the amount that we could have made on an equivalent investment, the system would pay back in under ten years.

Given the state of the economy, this is a far better investment than putting my money in the bank or buying CDs or even investing in the stock market. And it’s virtually guaranteed – as long as the sun shines and I keep using electricity, the system pays me back in 7-10 years. To me, the investment is a total “no-brainer.” In fact, if I could, I would invest in more of these rather than having my money languish in other investments.

It is important to note that these calculations are based on receiving NO national or state incentives or rebates of any sort. This is one of the reasons that the pre-paid lease is given on such favorable terms. SunPower owns the system so they receive the tax benefits. They pass some of those along to me in the form of a reduced up-front cost. However, Pennsylvania has some additional funds that could result in a rebate to me of about $7,000. This funding is uncertain, so I have not included it in these calculations.

Another financial incentive comes in the form of SRECs – solar renewable energy certificates. Unfortunately, in Pennsylvania, these are almost worthless, but elsewhere, they can be substantial. For example, if I lived in neighboring NJ, they would have been worth about $140 for the amount of energy my panels produced, reducing my effective electric bill to below zero and likewise cutting my payback period in half. In PA, they’re only worth about $20 for what I produced. In spite of that, the entire system is a great investment.

People ask “if you knew then what you know now, would you still have done this?” My answer is “absolutely!” The installation went relatively smoothly and the cost was right. Investing in a solar electric system for my home is something I would recommend to anyone who has the appropriate home and location. It’s an investment that not only pays financial dividends but also invests in our future.

6 thoughts on “How good is solar electric production?”