Philips has been a leader in LED lighting for some time, and their new SlimStyle bulb securely places them at the front of the pack.

While there are other, sexier dimmable LED bulbs, the SlimStyle has the best price/performance that I’ve seen. If you run the numbers, for a high-usage fixture (I define that as 8-hours a day) then you’ll find that this bulb pays for itself in about half a year in saved electricity costs. In my book, that makes it a “no-brainer.” It’s inexpensive, durable, casts a lot of pleasing light and is the first LED bulb that I’d call *cute* 🙂  Really, just look at it. What’s not to like? END_OF_DOCUMENT_TOKEN_TO_BE_REPLACED

Having received the just released CREE 60w warm white LED bulb, I wanted to get you my impressions ASAP since many of you are already asking about this ground-breaking bulb.

For comparison, an incandescent bulb has:

Based on simple lifetime cost, the LED lasts 25x as long as the rated life of the incandescent and is roughly 25x the cost of the inexpensive Sylvania bulbs, so by that measure, these are the “same cost.” However, that doesn’t figure in inconvenience of having to replace the incandescent 25 times, going to the store, or paying for the electricity! It doesn’t take a physicist to see that the CREE LED bulb is the big winner.

For the 25,000 life of the bulb, the CREE saves 1262 kWh or electricity. That’s a LOT of energy savings! How much? That’s about a month of your home’s entire electric usage. Compare that with your electric bill and you’ll immediately estimate your cost savings. For me, this electricity costs about $200.

The bulb feels different from any other bulb. It must have some sort of rubberized coating on the translucent housing. It almost sticks to your hands. In fact, I felt the urge to wash my hands after touching it. Very strange. The positive thing about this is that you’re not going to drop this bulb., unlike normal glass, which is slippery.

I immediately replace the bulb in my desk lamp, which is an old CFL. That works fine once it warms up, but it always seems to be a dim yellow for the first 10 minutes, by which point, I’m about to leave the room. Note however that I strongly recommend that you use this in fixtures with good reflectors on the back surfaces. Otherwise, you’ll waste a lot of light that doesn’t reflect off the back of the fixture. I learned this the hard way in my downlights (recessed light fixtures). Standard incandescent flood lights have internal mirrored surfaces to project the light forward. These LED lights are omni-directional, so you’ll waste a lot of their light output if they’re used in fixtures without good reflectors.

The CREE, being an LED light, is essentially instant-on to full brightness – very nice.

As for the color, it does appear to be a “warm white.” If you don’t tell someone that it’s an LED, they probably wouldn’t know, which is exactly the effect they’re looking for. In fact, combined with the shape of the bulb, I’m guessing that the only way one would know that this isn’t a regular bulb is when you dim it. Incandescent bulbs grow very warm at lower dimmer settings, whereas LEDs maintain their color temperature throughout the range or brightness.

The next replacement was in one of the downlights in my bathroom. These are particularly important because you want to maintain a neutral skin-tone. Nobody wants to look in the mirror and see a strange skin tone! In this case, the yellowish cast is definitely noticeable compared to the incandescent. I’m not sure why this is, but it’s quite obvious.

I then replaced the LED in my closet, which was a bright blue (my wife says it looks like s dentist’s office or something). The change in color was very apparent – definitely yellowy. I’m not sure it I like it or not. It’s definitely “warmer” but perhaps not as natural. I need to try some of the whiter versions of the CREE bulb which is supposed to be off-white. Here’s a comparison photo:

The container is very white while the counter tiles are almond. The photo was taken using the camera with manual white balance that is tuned for incandescent bulbs, so it will make the incandescent image look as white as can be. If you used a spectrophotometer, you’d get a more accurate image. However, it’s not how you’d perceive the colors.

Looking at the color spectrum, I found what would be expected, the light from the LED bulb consists of three distinct peaks – red, green and blue, whereas the incandescent is a smooth spectrum. In theory, you should be able to come up with a close color match using the three primaries, but contrary to popular opinion, you will not be able to perfectly match the color produced by a continuous spectrum source.

Perceptually, these images are a fairly close match to what I was seeing. Pretty good colors but not exactly what I’m used to. Your mileage may vary!

Here’s a striking comparison between the LED and the CFL using my desk lamp. Again, I kept the white balance on the camera set to “incandescent”, meaning a pure white would match an incandescent (which really isn’t white, but it’s what we perceive as white in our ordinary indoor experience).

Using the same camera settings, the LED is much closer to an incandescent

Keep in mind that perception changes our reality. The CFL doesn’t really look that yellow, because our brain tries to color balance things. However, the camera is good at showing things without this bias. The main take-home message is that the LED bulb is a vastly better match for what we normally think of as household lighting.

As you try out different bulbs, let us know what you think. The CREE, at only around $10 has broken new ground for quality and efficiency.  It’s well worth a try.

My shipment of the new CREE 60w bulbs came in! 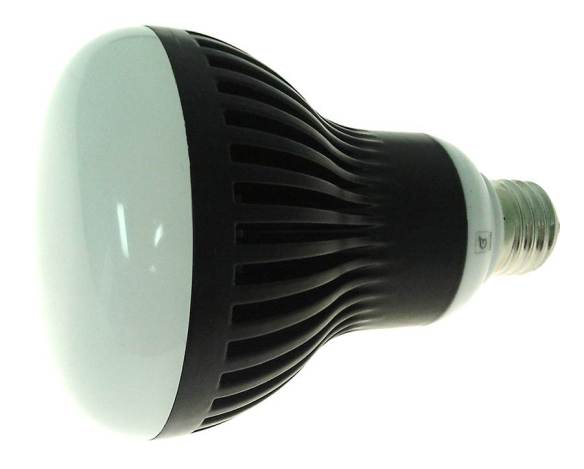 I just received a G7 LED flood light and it’s so impressive, I had to write about it immediately. This may very well be the LED bulb for recessed lights that we’ve all been waiting for – it’s that good!

What makes it so good?

END_OF_DOCUMENT_TOKEN_TO_BE_REPLACED

Great news for all us energy geeks! Now Philips has an LED bulb that puts out 1100 lumens – in technical terms, that’s a bucket load of light! For comparison, most of the other screw-in LED lights I’ve been commenting on put out the equivalent of a 40w-60w light bulb, maybe 600-800 lumens. For more info, see this press release on Engadget.

Note, the Engadget folks were WAY off in the lifetime. These bulbs last 25 times as long as a conventional bulb (as shown in the press release). 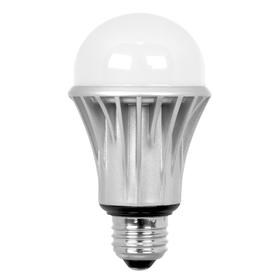 A friend just turned me on to this special deal at Lowes in Pennsylvania. The bulb, which he noted is manufactured by Feit (a highly reputable brand) is currently available for $9.98 at this link.

I just bought five more of the $20 Feit bulbs, so I was a bit chagrined to learn about this. But I’m happy for the rest of you. At under $10, there’s really little reason not to try a few of these around your home.

Keep in mind, this is a 40 Watt equivalent, so it’s not the brightest bulb around. However, it’s directional, so it’s good for those areas where you have downlights or other areas where the light output pattern doesn’t have to be totally uniform.

If you get one, please post your comments here. I’ll pick one up myself when I get a chance, but I’d love to hear your feedback.

The CREE CR6 is the latest in a line of energy efficient LED lights made by CREE. This light addresses some of the issues of the earlier lights, allowing dimming down to 5% and having a compact, light-weight package at about half the cost of earlier models.

It draws only 10.5 Watts yet produces as much light as a 65W incandescent bulb, so it’s definitely an energy saver. That’s a 55 lumen/Watt rating, putting it in the same ballpark as a normal CFL spiral bulb. But the fair comparison is with dimmable fluorescent downlights. Those range from 40 to 50 lm/W, so on average, you get 10%-25% more light from the CREE than you would the equivalent fluorescent.

END_OF_DOCUMENT_TOKEN_TO_BE_REPLACED

Just got a Pharox 300 dimmable LED bulb after my nephew (thanks Jason!) reported success with his. Guess what? It actually works as advertised! The thing dims right along with a conventional incandescent bulb – finally!

This is a standard Edison bulb, so you can use it in just about any fixture. The light is bright white and it stays that way as it dims. I know we’re all used to the dull yellow-orange light from an incandescent as it dims, so seeing a dim white might at first be a little disconcerting but over time, I suspect people will get used to it.

The Pharox is surprisingly bright for a bulb that only uses 6 watts. Remember that the output of LEDs is somewhat directional, so you’ll get the most light if you use this in a desk lamp that points towards your work surface or put it in a light fixture above you that’s pointing down. In this application, it works really well.

The dimmability is really impressive. I’ll have to do a video showing how it dims along with a conventional bulb. I’ve never seen an efficient bulb work this well. Every other one that I’ve used cuts out after it dims just a little bit but this one actually provides useful dimming. Very cool!

I’ve ordered another four to try in more fixtures around the house. At under $30, they may seem expensive (ok, they ARE expensive) but they’re a steal compared to other high quality LED bulbs. And for the energy savings, you’ll pay it back in a year if you put some in the kid’s rooms!

I’ll do more reports about it when I get some longer term tests. But for now, it’s definitely worth a try!

LED Insider – review of an older version of the bulb

1 Green Product – News and reviews. One of the longer reviews of the Pharox

A lot of people ask me about recessed lights, so I put together this video so you could see some of the pros and cons of the best LED light I’ve ever seen.

The CREE LR6, LED based recessed light retrofit is the current one to beat. It’s simply amazing. It turns on instantly, it supplies high quality light and it’s built like a tank. Watch the video for the full scoop!

After reading some other reviews, I decided to purchase several CREE CR6 retrofits. You can get them on the Home Depot website for $50 and they’re supposed to be dimmable down to 5% as opposed to 20% for the CR6. So there’s some hope for a good dimmable retrofit bulb.

I’ll do another video comparing the two once I’ve had a chance to play with the CR6.

CREE also has a number of other new lights that I wasn’t aware of. The new LR6 puts out 50% more light for the same amount of watts for a luminous efficacy of 80 lm/W

Other posts and sites covering the Cree LR6

CREE 6″ downlights page – The official CREE page on all their downlight products. Dimmable to 20%

Dave Hultin blog post – The CREE LR6 – It Really is That Good!